Intricate and dynamic. A New Milestone in Class-A Stereo Power Amplifiers. All of where the music is opened up and depicted fully – Grandioso S1X.

The monoblock M1X embodies ESOTERIC’s idea of the ideal amplifier. The dynamic sound of the M1X, produced by a completely redesigned drive stage and a powerful power supply unit that incorporates an enormous amount of material, has captivated audiophiles around the world. The S1X, a Class-A stereo model, beautifully follows the M1X’s signature sound of ”a sense of dynamism that unleashes the full power of music” and ”a sense of grand scale.” In exchange for its high power of 2,400W/1 ohm, the S1X offers a half the space form factor and the transparent and detailed expressiveness that only Class-A can deliver. Here, is a milestone model that realizes ESOTERIC’s ideals of the Class-A stereo amplifier.

The newly designed drive stage, a simple 5-parallel push-pull drive with high-capacity bipolar transistors, is Class-A (operating range 50W/8Ω) and has a dense and transparent sound. However, the general characteristics of Class-A, – low distortion and high precision – cannot describe the beauty of the S1X at all.

Vivid colors like a direct-heating triode amplifier, high-speed sound start-up backed by ample idling current, and driving power, openness… The S1X’s new Class-A drive stage inherits the powerful and dynamic design concept of the M1X, including high-capacity bipolar elements with powerful tones and a powerful power supply section. Regardless of the amplification method, the S1X earnestly pursues what an amplifier should be and achieves a sound quality that is the total sum of ESOTERIC’s commitment.

With the flagship Grandioso separate amplifier, ESOTERIC is breaking new horizons by pushing the limits of fidelity in pre-power transmission. ES-LINK Analog, for example, ESOTERIC’s unique current transmission method, is ideal for pre-power transmission, where the signal level is extremely low in actual case, and transmits approximately 100 times more current than conventional voltage transmission. Therefore, it is less susceptible to noise, and all the energy of the music is sent from the preamplifier to the power. In addition, the output signal from the preamplifier and the input signal to the power amplifier can be kept extremely identical because, in principle, they are not affected by the impedance of the connecting cables.

Robust driving power worthy of a flagship. The source of this power is ESOTERIC’s dedicated power supply unit. For amplifier blocks that constantly require high current for Class-A operation, the power supply is the most key component to achieve a powerful and rich sound stage. Thanks to ESOTERIC’s unique power supply design, the S1X boasts an extremely dynamic musical expression with great precision.

The S1X employs the largest capacity toroidal transformers that the S1X chassis can accommodate. The transformers performance, with a much larger capacity than the original product, allows for extremely high follow-through to dynamic changes in current supply, resulting in a dynamic and open sound. Also, suppressing transformer vibration results in suppressing current flow. For this reason, the S1X dares to employ a bare mounting with the case removed.

The S1X’s high resolution sound is also a major feature, allowing the delicate tones of each instrument to be heard clearly, even at the climax of a full orchestra performance. A power supply section dedicated to the pre-drive stage (voltage amplification stage), which handles low-level signals from the preamplifier, eliminates the influence of the drive stage, which has large current fluctuations, and improves resolution.
In addition to the two power transformers for the drive and pre-drive stages, an R-core power transformer for control is installed in a three-transformer configuration to create a pure power supply with thoroughly low noise.

Unless it is a monaural source, the left and right music signals are different. The power rectification circuits are designed in dual mono configuration, not shared by both channels, to avoid mutual interference and achieve clear channel separation and resolution.

The rectification system also incorporates Grandioso’s unique and thorough attention to detail. The Grandioso High Quality Sound Custom Capacitors are employed for the block capacitors, while the dual mono and parallel configuration of 6 x 10,000μF per channel ensures the high current supply required for Class-A operation at all times. Therefore, the S1X follows the dramatic changes in musical signals with agility and express dynamism to the fullest extent.

Key wiring sections such as from the primary side to the power supply section, drive stage, etc. employ over-sized pure copper busbars and ultra-thick gauge cables with bolted connections. The response of the power supply is maximized by ensuring a low impedance.

Considering its massive appearance, this may seem a little surprising. However, the signal paths in the S1X are designed to be as short as possible, and the circuit is surprisingly simple. The clear sound quality is supported by the ”subtractive aesthetics,” so to speak, created by the crystallization of advanced engineering.

In general, a Class-A amplifiers generate a lot of heat, and internal temperature stability is extremely important. For this reason, the S1X optimizes the position and circuitry of the temperature compensation circuit to stabilize the temperature of the entire amplifier block. This contributes to high quality sound because it speeds up the stabilization of the idling current after power-on and allows the amplifier elements to operate with their best characteristics.

The phase compensation circuit is a simple 1-pole configuration, and the final stage is coil-less, while the NFB (negative feedback) is kept to a minimum to enhance the dynamism of the music. The minimalist circuit philosophy allows the harmonics (overtones) that are most important to music, but are easily lost, to be retained and rendered expressively.

Despite the simplicity of the circuit, the S1X has been designed to eliminate any compromise in the quality of reproduction by using a dual monaural configuration from the input stage to the final stage, with the input stage being the most important stage. The components are among the largest in their class, and the board pattern, which employs a 105µm thick copper foil in key components, and ultra-thick gauge cables with connector connections eliminated as much as possible, are full of the boldness and power that is typical of power amplifiers. Particularly, the seven busbars in the drive stage are made of luxurious 1.0 mm thick high-purity OFC material, and MOS FET switches without mechanical contacts are employed in the speaker output stage. The reduction in internal impedance provides a powerful grip even on woofers with larger diameters, and the driving force reaches the low-frequency limit point with ease.

The S1X is not only a powerful unit, but one that also delicately creates a gradation between climax and silence. The audio signal is received by a newly designed balanced amplifier independent of each input stage and transmitted to the amplification stage in a balanced manner to ensure noise-free and stable amplification. FET switches are also employed for all switching positions in the audio signal path, including input switching, to minimize tonal coloration. Carefully selected high-quality components, such as the IDM-01 (Integrated Discrete-Amplifier Module) developed for the previous C1X, accentuate the texture of the tones.

The Grandioso S1X behaves not only as a stand-alone stereo power amplifier, but also offers flexibly in a variety of high-end-worthy applications. The system is expandable to a mono-block amplifier by deploying two S1Xs, depending on the speakers to be combined and the operating environment. A Mode selector supports conventional stereo mode and bi-amp mode for high-quality sound of multi-way speakers with separate HF/LF inputs. You can build the Class-A amplifier system of your dreams according to the quality and characteristics of the sound you desire. Even if the amplifier system becomes large, the power ON/OFF is controllable from the Grandioso C1X preamplifier via DC Trigger*, allowing sophisticated use suitable for high-end applications.

*3.5mm monaural mini plug cable for connection is sold separately. Please prepare a cable of the appropriate length for your environment.

When two S1X units are deployed and set to ”bi-amp mode,” the same audio signal is delivered from the output terminals that were L/R in stereo mode. This means that a single unit can be used as a monaural power amplifier with two speaker outputs. The output power is the same as when one S1X is deployed in normal stereo mode (50W/8Ω), but as shown in the figure, the HF/LF units of the speaker can be driven by separate power amplifier circuits, enabling a more pure sound of a multi-way system speaker. This mode is effective when resolution is more important than driving power. 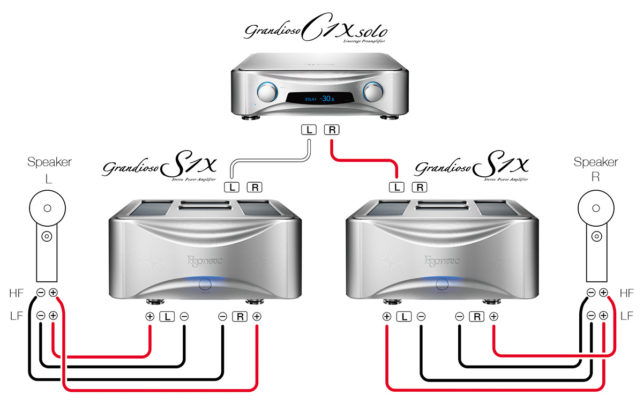